This New Year’s Eve, toast all of your friends back home from horseback in Spanish countryside.

Located in the Cabo de Gata Natural Park in southeastern Andalusia – you will enjoy the New Year in an amazing way. The area of Analusia is the most sunny in Europe, and the perfect place for a great ride. Your route for the week takes you through the Cabo de Gata Nature Park, a pristine area with wonderful riding and then along seaside paths and interior valleys, all of which help you discover little unknown villages, true gems of the area. The temperate climate makes this ride exceptional at the end of the year and a superlative way to ring in the New Year!

Meeting and transfer from Almeria airport, bus station or train station or Granada airport to the equestrian center. Presentation of the ride, dinner and overnight in a nice hotel in San Jose.

Rodalquilar - El Playazo.
In the morning, after breakfast, the guide will assign your horse and you will have a short ride in the arena before leaving for the trail ride. For the first day of riding, we will visit the eastern part of the Natural Park.

We will head towards the Torre de los Lobos (Wolf Tower) where we can have a view on the whole natural park and, if the weather is clear, the snow-capped peaks of the Sierra Nevada. We will ride to the beach of "El Playazo", which was a known stage of pirates. Picnic by the sea.

Then we leave by crossing a palm tree oasis fed by small water sources. About 5 hours horseback riding.

Rodalquilar - The Isleta del Moro - San José.
We will leave Rodalquilar by a great path which borders the whole coast. These trails were formerly used to monitor the coast in the event of an attack by Pirates, which explains the presence of small castles and watchtowers.

With its small oasis of palm trees, we will have lunch in the form of a picnic on the beach of Escullos. About five and a half hours of riding.

For lunch, we will have a picnic at the foot of the "el romeral" cortijo, one of the typical facilities that used to be, for a time, housing for the farmers of the area.

In the afternoon, we will ride in the valley "del Tesorillo". About 6 hours on horseback.

San José - Las Negras.
To the north of the park are the mountains of the Sierra de Gata which have preserved the boilers of the ancient volcanoes, surrounded by a lunar landscape and original villages like "Los Albaricoques" where were shot several famous westerns: For a Handful of dollars , Le Bon la Brute and the Ugly, etc. The streets have names such as: Clint Eastwood, Sergio Leone ...

Lunch at one of the park's most famous sites, El Cortijo del Fraile. It is here that the events that inspired Federico Garcia for his work "Bodas de Sangre" (The Wedding of Blood) took place.

Fernán Pérez - Golden Mine - The Negras.
We will take the old trail of the gold mine, we will pass through small ravines that were once the only connection between the farms of the mountains and the sea. Then we will cross the crater of the volcano which now forms the Valley of Rodalquilar and we will discover the walls of minerals that still hide gold and finally, we will visit the old installations of the mine that worked from 1933 to 1986.

Time to clean up and get ready for our festive New Year’s Eve dinner.

The Negras-Rodalquilar.
Las Negras is a beautiful place, of a spectacular geology in a fishermen's atmosphere. At the far end of the bay is El Cerro Negro (La Colline Noire), an impressive rock formation that has the appearance of a lava language, witness to what was the Natural Park of Cabo de Gata.

In Las Negras, you will find water-irrigated orchards that come from small fresh water flows of the Rambla de las Agüillas and accumulated in small ponds close to the sea.

Lunch will be traditional Paella in a typical restaurant at the seaside. About 3 hours 30 of riding.

Transfer to the airport after breakfast. 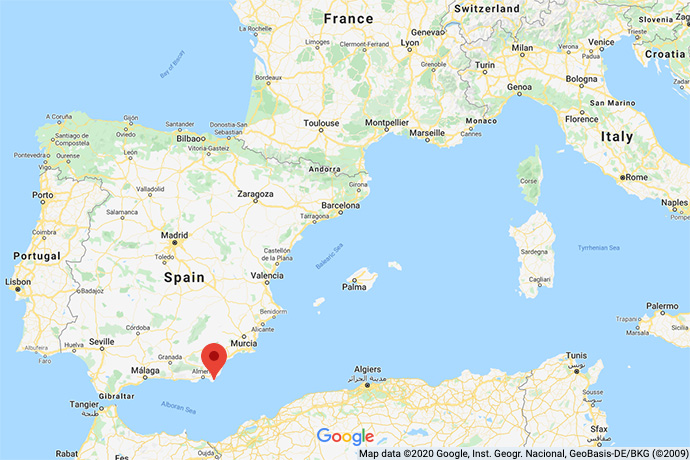 Ride back into French history - and spend 7 amazing days in and around the...

Get ready to ride folks - this is a truly epic trail ride conceived 40...

Jordan is known for the ancient city of Petra, one of the seven wonders of...